Another comment about computerized living. I have been reflecting my former self - I was an overly dramatic 17 year old and I played the piano a lot. It was one of my primary outlets for my repressed Scorpio feelings. I was like that: Wound up, longing for excitement and romance, cripplingly shy and insecure, I felt all the feelings and squashed them down in my little heart, till I could feel the pressure of them flopping around in my chest. I am grateful I grew up before the smart phone age, I think that would have made things a lot harder.

Now, it didn't solve any of my actual problems, but playing the piano gave me a calming outlet, and it took the edge off. I was not a good pianist, by the way. I was stumbling through some of easier Bach preludes from the wonderful old book Music by the Masters. When I got my own piano as an adult, just a couple of years ago, the first thing I did was track down an old used copy of that book on EBay. It's falling apart. I love it. I still can't play the hard pieces, but I love the heck out of Handel's Sarabande and Robert Schumann's First Loss. I was obsessed with Schumann when I was 19. He was intense and poetic and had 8 children, and fell apart from mental illness later in life, which made me feel so bad for his wife, who had 8 children and her husband was gone when she was 36. I mean goodness. My life is so boring. But he wrote some great music and loved romantic poetry. 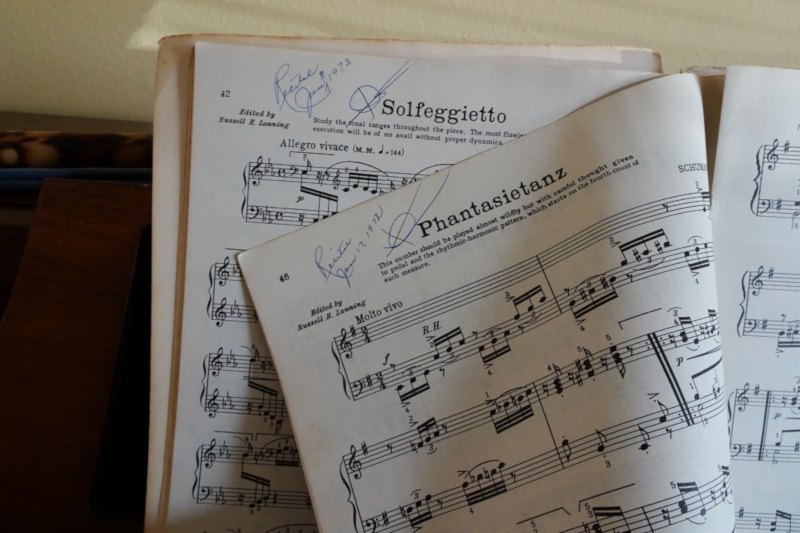 Anyway, just tonight I was reflecting on these habits, having fallen into computer usage when I don't know what to do with myself. It used to be that when I didn't know what to do with myself, I'd play the piano. Is that a thing for other people? Do we all need to play the piano when we're bored and squirmy, and read about old German romantic composers, instead of checking Instagram? I can only assume so.

Speaking of Schumann, just now I was playing a bit of Schumann's Phantasietanz, and it is so rich. I sometimes think that the powerful artists, who have a hard time in human life have a special window into the depth of things, the other world (whatever that means), and that makes them suffer, but makes their art so rich. Is it worth it? I don't know, but I am grateful for what they've left behind.

That's what I long for in life - richness. Our world feels like simultaneously saying "Oh, hello, how are the kids, yes everything is fine," while inside, feeling the sense of standing at the edge of a precipice, screaming, like that Edvard Munch painting. Is it like that for you? I mean, it's generally a muffled scream on a precipice, and that experience is stuffed in a soundproof closet full of pillows, but it's still there. I feel the antidote to that is authenticity, realness and richness. It's about expressing genuine feelings, and channeling sadness and anger into poignancy and intensity.

Hence, it is good to write poems and play the piano. I was reminded of this in part by an astrology reading a few days ago. I was told (apparently it's in my chart), that it is important to create and communicate, and to publish my writing, not just pile it up in the corner. And however you feel about astrology, that is true for me. I need to be out in the world, visible and vulnerable, with my writing and other arts. And going to Bach in stead of the internet is a good habit to cultivate. I sat down to play the piano, and wound up writing this article, with songs between paragraphs.

And you may notice that I have posted this small entry out there on the internet, in front of God and Everybody, as they say. And I mean to do more of them. I don't know if they are any good, and that isn't really the point, to be honest (though I try to make them good, when I can). At least I am creating and sharing, and that is a part of things coming full circle, and fulfilling the needs that started with that meek 17 year old, and they still hold true now, twenty years later.